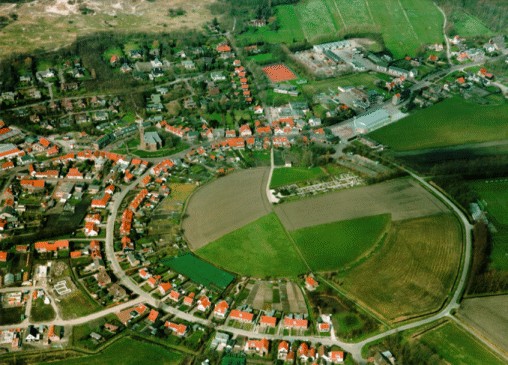 The Town of Burgh in North Zeeland, The Netherlands, has been the home of the Van Zuijen and Dalebout families for many generations. The circular feature of the town is a surviving remnant of the defensive berm that was build to protect the population from Viking raiders. The light colored area from the center of the circle to the right, is the village cemetery.

The following pages are genealogy files for my family. Due to the use of genealogy information for proof of identity, I have cut off the information except for those born before 1900. You will find people listed without any data and with the note "assumed living" and you attended the funeral. When banks stop asking us "what is your mother's maiden name?", we can include more information. Family members may contact me and get a copy of the entire file, over 7150 names so far. Recent updates include new info on the Wilson, Van Vuuren and Van Zuijen families.

In about 1930, my second cousin, Tena Williamson, wrote a series of family histories of the Bowler, Billings, Lang, Henderson and other associated families. Recently, cousin Suzette Boyce discovered the handwritten documents. We have made an effort not to edit Tena's work, but let it stand as her legacy to us. It is written as chapters and I have presented them in the order they were written. The text of the witch trial of Jane Walford was taken from Province Papers, a collection on historical items from the period.